It's camping day. And I'm still packing. Normally I would blame my procrastinating nature but the confirmation didn't happen til yesterday.

Most of my gear is packed already and all that's left are pots and pans, clothes, food and toiletries.  Not much more work to be done in the 3 hours we have left til we leave.

but at least I know the tent is still on good shape. 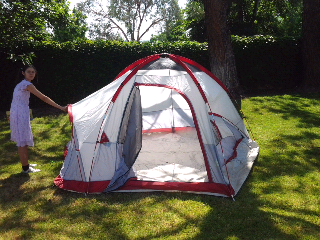 Endings and Explanations (Letting Go of the Wrong)

One major issues I have with break-ups is the reevaluation of the relationship. Essentially the post mortem of what we really were, what damage it did and what did I learn from the mistakes. With those revelations comes a period of anger when you realize there were many realities in which were denied and many issues that were never stated.

I know full well I made a lot of mistakes in the relationship. I make no excuses and take full responsibility for them. My reactions to some of the events I am not proud of and I took ownership to them once I was caught. Some of those actions were taken as a retaliation to being hurt but that’s no excuse. The fact was I did the wrong thing. I should have voiced how I felt more clearly and given an ultimatum of sorts, instead of simply taking it. Doing so I would have either ended something that was needing to end long before it actually did. Instead, I simple kept my mouth shut at the wrong times, opened it without any real form of tact and didn’t realize what was really going on until long after we ended. Because of this, both of us ended up suffering our shares of hurt and anger and we now have no real contact with each other.

In my case, my pain and anger developed from a disturbing realization of what we really were and what was really happening. On one side, our problems began when I resumed sleeping with my ex when being constantly told by A. that we were “just dating” and being hidden by friends and family of our relationship. Looking back on that event, my first reaction was the right one, the relationship should have ended. The cause was way more in depth then just the title she dubbed us. I look back now and her divorce was and is still pending. I never once thought I was a home wrecker. She was in a relationship with one other person between her husband and I and had been involved with others before me as well. The warning bell occurred the first night I met her. She still has a party lifestyle that I had grown out of. During my 20’s where I was part of the club and party scenes she was a married woman who was starting her family. Now that she was given a real amount of freedom, she took advantage of the lifestyle in her late 20’s and 30’s. Some of this has given her and us issues but that’s not my problem any longer.

Another issue I had with her was something I never realized until recently. A. has a lot of male friends, all of which she had never physically cheated on me with any of them. However she has had emotional affairs with all of them. This is more damaging in my opinion because it creates tension and jealousy along with mistrust. Combine that with her inability to actually commit to a real relationship and finally an inability to take criticism without crossing a thin line of talking down to her like a parent would makes it difficult to communicate. Simple put, she can tell me everything I’m doing wrong but can’t be told the same without a verbal lashing, being accused of a Jekyll and Hyde mood swing or a slap in the face.

Also A. has admitted to me that she requires a lot of personal attention. A level she admits is high but in the end I realized that there was no way any person could realistically give that level of attention to her without causing serious damage to my priorities and self worth. In the end, My self esteem was lower with her than it had been ever been before. I had major stress events because I couldn’t meet her needs and I’d watch her travel to others to get her attention fix.

Finally there was something that I fought long to deny out of guilt or fear. The fact is, I do blame her for what happened last Valentines day. Something I will not put on a blog but have spoken to close friends and therapist about had me realize that her actions, her mental state and choices she made at the time all contributed to the disaster we encountered that day. I’m still unable to forgive her and I can no longer deny what I truly believe happened.

All of this lead to a huge unbalance in relationship equality that easily ended  in disaster and I harbor a huge amount of anger toward her. I see most of our relationship lacking relevance and because of it, I feel I wasted a lot of my heart of someone who was unable to reciprocate it and because of that I made the choice to remove her out of my life.

She is right, I did throw her away, I couldn’t live like that anymore. I have a ton of issues internally and externally that I’ve needed to work out to be where I want to be and move forward and I no longer think I will be able to make those changes while catering to her. Maybe had I met someone more in tune to her needs and was able to include me in her life instead of having me as a part of physical and emotional entourage, things could have turned out great between us. Instead her quest for self worth turned into selfishness and the added stress those choices made by her made her disposable as I followed the first rule of therapy, Take whatever is stressing you out the most and get rid of it.

I still don’t see her as an evil person, far from it. I see her as a wonderful woman capable of  being an inspiration to those around her and one day I believe she will find someone who will help her realize her needs and meet them in every way. I’m sad it wasn’t me but everything happens for a reason.
Posted by Unknown at 9:48 PM 1 comment: